March 09, 2012
On my walk today I came across a little pink thistle.  It reminded me of the movie Horton Hears a Who and I paused to smile and wonder if this little thistle happened to have a 'spec' on it where there was a whole civilization living. 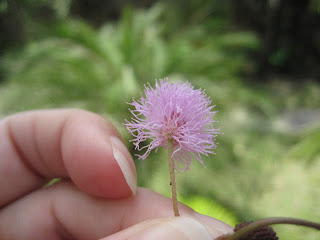 Then my mind took a sharp turn to the media frenzy that is now surrounding an organization called Invisible Children that is working towards arresting one particular individual who has been abducting children for many years and forcing them to become child soldiers. My smile faded and I could feel the tears prick behind my eyes. Really, we are all specs on this planet, aren't we? Every spec, big or small, deserves a chance to grow and prosper. The organization has produced a film that has quickly gone viral. "The 29-minute video was watched by an astounding 2.7 million people on Tuesday alone," according to a Globe and Mail article, that ran yesterday.  It went on to say that by Wednesday, 14 million people had seen it and that it has become the most Tweeted topic worldwide.

In the beginning of the film, the creator shares a very personal, poignant moment during his son's birth and ponders something that I myself have reflected on many times during my travels...how fortunate are we who have been born to privilege.

Now there have been some naysayers who question the approach the founder of Invisible Children has taken.  I even had a friend who has been working in Africa for several years send out a blast email saying that it's "another horribly misguided campaign that belies the facts on the ground, as well as the complexity of the issue at hand."  I have a lot of respect for this person so I felt the need to look at both sides of the story.  A Washington Post blog post by Elizabeth Flock presents both sides quite nicely.

Critics say that arresting one man won't solve the problem. However, I believe that if everyone had as much passion and commitment to make a difference as the founder of this organization does, then the world would be a much better place with more of the 'little specs' having a voice.

I've personally been supporting children's charities since I was nine years old and believe that supporting literacy programs in the developing world is the way to ensure systemic, lasting change.
I'm not suggesting you do or do not support this initiative, I just wanted to share the thoughts that were triggered by a little pink thistle.

Lynda said…
Interesting post Anne. I guess I've been living under a rock because I hadn't heard of the video. In typical UAE fashion, I seem to be having a problem watching it but looking forward to checking it out.
15 March 2012 at 00:25

Anne Louise O'Connell said…
It's caused quite a stir. I hope you can find a link to the video that works. It's an eye opener for sure.