Nurse! A Memoir Launches in Celebration of Author’s 60th Anniversary 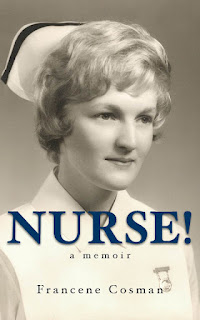 The next title coming out from OC Publishing is written by a woman who spent the early years of her professional life as a nurse and, after raising her children, making history in Nova Scotia Politics! On September 23, we will launch Francene Cosman's memoir, Nurse! in celebration of the 60th anniversary of her graduation from the Saint John General Hospital nursing program. The milestone follows shortly after she was awarded a Queen's Platinum Jubilee Medal.

To say we're thrilled to be partner publishing her memoir is an understatement! Francene felt it was timely to tell the story of her nursing training in the 1960s, a reflection on how training was done in the past, as the spotlight on healthcare increases, and demand for change intensifies.

"Given the chronic nursing shortage it may be time for a dialogue about how nurses receive their education," said Cosman, "and to examine a return to early hospital training on the job, a model that worked well."

Cosman feels that nursing provided strong foundational skills that underpinned future political involvement. A long political career ensued, first as a county councillor, then the first mayor of Bedford, NS. She was appointed president of the provincial Status of Women; four years later she chaired the task force on the concerns of women and became the executive director of the Liberal Party. In 1993, she was elected to the NS Legislature and became deputy speaker. In her second term of office, she was appointed to Executive Council as Minister of Community Services, Minister for the Civil Service, and Minister of the Status of Women.

Nurse! A Memoir is available from most online retailers and can be ordered into you local bookstore on request. For more information visit www.ocpublishing.ca/francene-cosman.html.