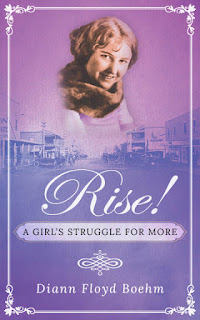 The next title releasing from OC Publishing will be author, Diann Floyd Boehm's, first YA novel, Rise! A Girl's Struggle for More, an old fashioned, historical family drama, launching on October 20. Set in 1920s Oilton & Drumright, Oklahoma, and Chillicothe, Missouri, it is a sweet, yet edgy (think Laura Ingalls meets the "It Girl"), coming-of-age story based on the real life of the author's grandmother.

"When I first heard some of the incredible stories of my grandmother's life, I just knew I had to write about her," said Boehm. "She had watched all her brothers go off to college and when she asked her parents if she could go too, they told her she should get married."

As the story goes, this didn't sit well with Ruby Pearl! She felt she was just as smart, maybe smarter, than her brothers.

Ruby is mature beyond her years, born at least a decade too soon. Growing up in a family of nine children in Oilton, Oklahoma, with her nose constantly in a book, she's the girl who would rather read than can tomatoes.

Ruby studies hard to make good grades, while her parents humor her. They encourage the courtship with her beau, Arthur, who they expect will be their son-in-law when the two graduate from high school. Ruby has loftier goals than that. She admires her momma and big sister, Rilla, the "CEOs of the household," and hopes to have children and a home of her own to manage someday, but first things first!

Ruby's story unfolds amidst the backdrop of a horse and buggy town welcoming his first motor cars. She becomes a pioneer for girls her age, following the inspiraiton of the suffrage movement, breaking all norms, defying tradition--and her parents--to become a truly independent woman.

"My grandmother's stories were so inspirational...here was a girl who was going to do everything she could to be independent, even it it meant standing up to her parents," said Boehm.

The plot brings plenty of twists and turns. "I heard stories of roughnecks and gangs trying to take over the town and my great-grandfather's role in keeping them all in line," said Boehm. "There was enough real-life drama in my family stories, I didn't have to make up any of the really dramatic scenes."

Rise! A Girl's Struggle for More is available now for pre-order on Amazon, Indigo/Chapters and Barnes &
Noble. There is also a dyslexia-friendly edition available at Barnes & Noble. Or ask your local bookstore to order it in for you. Pre-launch preview parties will be held in Drumright and Oilton the first week of October. For more information contact the author.