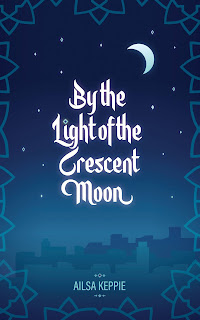 I'm thrilled to announce that the next book coming out from OC Publishing is a 'lyrical and sultry' memoir by Annapolis Valley-based author, Ailsa Keppie. By the Light of the Crescent Moon will launch on August 26 (Women's Equity Day). In her memoir, Keppie shares her story of falling in love with a fellow circus performer, converting to Islam, moving to the Middle East, and taking on the role of a pious wife.

By the Light of the Crescent Moon is Keppies eighteen-year odyssey that begins when she dons a burka for the first time and truly commits to embracing her husband's culture; from moving to his home country of Morocco, to learning his language.

"Ailsa' book is a page-turner. The story of a young woman's growth into adulthood, from her Nova Scotia childhood through a period of self-searching that led her to convert to Islam and learn both safety and invisibility behind the hijab, to welcome four daughters and even a second wife into the marriange, is unusual and compelling," said psychologist Dr. Leslie Ann Costello.

Keppie wrote her memoir after returning to Canada as a way to process what was a difficult period in her life.

Keppie also said she felt a need to go back and find meaning from the struggle she'd had over those years.

"I'm not really sure why I converted but the draw to Islam was part of finding a sense of belonging. You put on hijab and suddenly you're a member of a community," said Keppie who was 25 at the time. "And there was kind of a spiritual connection involved in the love story. It became entwined for me - the spiritual path and the love path, which made it all the more difficult to get out."

As the story progresses, cracks appear in her relationships. We are drawn to her inner struggle, often seeing the folly of her choices, but championing her to prevail. Torn between her inner voices of duty, shame, longing, and hope, she is determined to find the light that will get her through darkening times.

By the Light of the Crescent Moon is available now for pre-order on Amazon, Barnes & Noble and
Chapters/Indigo. For more information visit www.ocpublishing.ca. Learn more about the author and her current life as an intimacy educator and somatic healer at www.pleasureforhealth.com/about-ailsa-keppie.

Aurora Jean Alexander said…
This seems to be a very interesting read. Thank you very much for the introduction.
7 July 2021 at 10:11