March 24, 2014
I am pleased today to host a guest blog by author mentor, Morgen Bailey. Morgen was extremely supportive when I launched my first novel and I'm delighted to have her share her insights on what it takes to be a successful writer.

Take it away Morgen!

American science-fiction novelist Jerry Pournell is reported to have said “I think it takes about a million words to make a writer. I mean that you're going to throw away.” I started writing for fun nine years ago and more seriously six years ago and with seven NaNoWriMo novels, one-and-a-half novels in between, three NaNoWriMo story collections (a cheat on doing a novel November 2011 but I still made the 50,000-word minimum), part of a script, some poetry and loads of short stories under my belt, including three 31-story collections for Story A Day May and five 50-story collections for 5pm Fiction, I know I’ve reached that target. How much of them I’ve thrown away I couldn’t tell you but it’s only a fraction because everything’s reworkable, and if, like me, you’ve dabbled before really knuckling down, you’ll feel better for it. It’s all about practice. If someone sat you in front of a piano, would they expect you to play a concerto? Would you expect that of yourself?

In my experience too many novice writers worry about finding their ‘voice’ and understanding their ‘craft’ early on. It can be a long journey, perhaps not as long as a million words, but providing you write regularly (daily is the ideal but when does life afford that luxury, although 300 words equates to 100,000 words a year so a great incentive) you’ll get there… and here are a few basics to put in your suitcase:

·      Probably the most used phrase when teaching writing is ‘show don’t tell’. If you have a character who is angry for some reason, saying ‘Andy was angry’ is a classic example of ‘tell’. Simply put, you’re not showing us how. If you wrote ‘Andy slammed his fist onto the table’ you are.
·      Dialogue tags – it’s recommended that you can only go up to six pieces of dialogue (between no more than two people) without attributing it to someone. And there's nothing wrong with ‘said’. Don’t be tempted to look at your thesaurus and say ‘Andy postulated’. You could also avoid tags by another character saying “Oh Andy, that’s…” or in the description; ‘Andy laughed. “That’s…”
·      Character names are important as we often get a sense of their personality by what they’re called. A Mavis is likely to be older than a Britney and would, usually, act differently. Avoid having names starting with the same letter; if you have a Todd talking to a Ted, the reader can easily get confused. Bill and Ted would be fine and as we know, they had a wonderful time back in the late 1980s.
·      I’m a big fan of repetition… of not doing it. Unless it’s ‘the’, ‘and’ etc, a word should only be repeated if the second instance is to emphasise or clarify the first. For example, ‘Andy sat in the car. He beeped the horn of the car.’ You don’t need ‘of the car’ because we already know he’s in the car. If you said ‘Andy sat in the car. He beeped the horn and the car shook’ that would be fine because you’re clarifying that it’s the car and not the horn (because it’s the last object you mentioned) that’s shaking.
·      Stephen King’s writing guide / autobiography ‘On writing’ has been the most suggested book in the interviews I’ve conducted. Amongst other things he’s notoriously against adverbs (‘ly’) and fair enough – in ‘completely dead’ you wouldn’t need the completely because dead says it all, and a character doesn’t need to be ‘sighing wearily’ because the sighing tells us enough, but adverbs are necessary in the right context. Again it’s all about clarification and fine-tuning.
·      Every word has to count; does it move the story along or tell us about your characters? If not, the chances are it can be chopped.
·      If you’re having trouble with a passage move on or leave it and return later with ‘fresh eyes’.
·      Read. It doesn’t matter whether it’s your genre or not (one of my Monday nighters writes amazing sci-fi but has never read a word of it) but reading will help you see how a story is structured and balanced between dialogue and description; short sentences speed the pace, long passages slow it down.
·      Join a writing group, get your work critiqued. Read your work out loud. It’s amazing what you’ll pick up when you hear it outside your head.
·      Subscribe to writing magazines, go to workshops, literary festivals. If you really want to write immerse yourself in all things literary.

There are many more examples I could give you (there are more on http://morgenbailey.wordpress.com/writing-101) but all you need to remember is that it’s not about clever words (because that ends up becoming ‘purple prose’) but just getting pen to paper, or fingers to keyboard and having fun. When your characters take over (and they will) you’ll have the time of your life!

What are your writing essentials? Do let us know.

Morgen Bailey biography
Based in Northamptonshire, England, Morgen Bailey (“Morgen with an E”) is a prolific blogger, podcaster, editor / critiquer, tutor, speaker, Chair of NWG (which runs the annual H.E. Bates Short Story Competition), freelance author of numerous short stories (available on Amazon.com and Amazon.co.uk), novels, articles, and dabbler of poetry. Like her, her blog, http://morgenbailey.wordpress.com, is consumed by all things literary and she loves chatting with other writers and readers. Her email is morgen@morgenbailey.com. 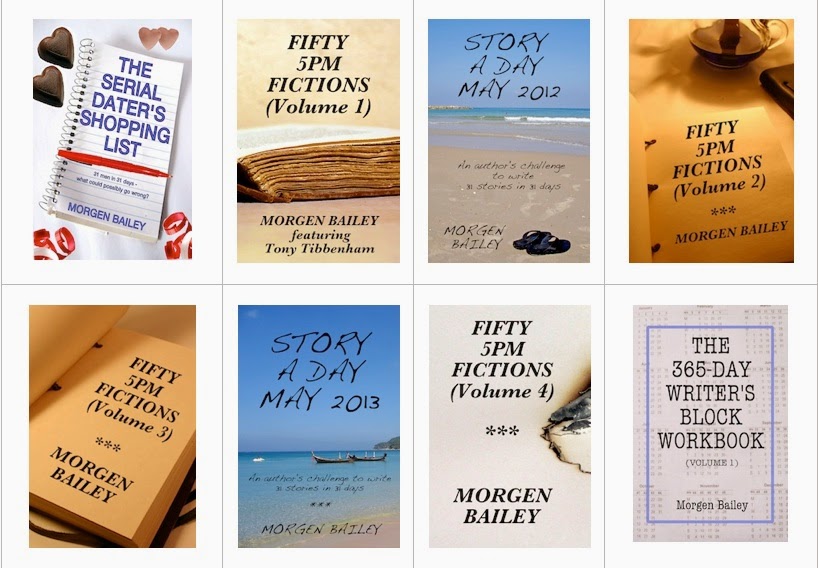 Morgen With An E said…
Thank you very much, Anne. It's great to be able to reciprocate. I look forward to hosting you again... and perhaps you hosting me again sometime.
24 March 2014 at 16:42

Anonymous said…
Great tips! Thanks to both of you. I'm a little embarrassed to admit I read 50 Shades of Grey to see what all the hype was about. The repetition of certain words drove me NUTS! I thought is was so unimaginative.
25 March 2014 at 14:31

Seumas, thanks for dropping by!

Interview with Montaha Hidefi, author of Groping for Truth - My Uphill Struggle for Respect

Anne Louise O'Connell
An author, developmental book editor and partner publisher, Anne can be found working on her latest novel, mentoring other authors, publishing books or leading writing workshops. Anne’s first novel, Mental Pause, launched on International Women’s Day, March 8, 2013, won an Independent Publisher Book Award (IPPY). Her next novel, Deep Deceit, launched March 8, 2015. She is also the author of @Home in Dubai; and 10 Steps to a Successful PR Campaign – a Do-it-Yourself Guide for Authors and while living as an expat in Thailand, was a regular contributor to the Wall St. Journal Expat Blog and Global Living Magazine. Upon her return to Canada in 2016, after 23 years of expat life, she established OC Publishing in Halifax, NS. For more information visit www.ocpublishing.ca. Follow Anne on social media at: www.twitter.com/ocpubhfx www.facebook.com/ocpublishing https://www.linkedin.com/in/annelouiseoconnell/ www.instagram.com/ocpubhfx