Watch What you Say on Social Media… You Never Know who’s Lurking! 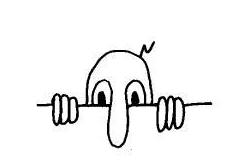 I’ve had several people lately tell me that they don’t do much with their Facebook profile but that they’ve set it up just to see what people are up to. It’s what you would call ‘lurking’ and it’s fine when you imagine it to be family, friends and close colleagues but it’s a bit creepy when you think about the potential ripple effect.

It’s a well-known fact that there are people out there who use social media for nefarious purposes, like stalking you online (a friend of mine was just freaked out by a guy she had ‘met’ online only a week ago who was proposing marriage and sending rather shocking pictures of himself).

I’ve always been a proponent of not putting anything ‘out there’ on any social media you may be using whether it’s Facebook, Twitter, Google+, LinkedIn, Pinterest (which I haven’t truly tried yet but it’s on the To Do list), that you wouldn’t want to wind up in the news headlines tomorrow.
This goes double if you’re using social media for professional purposes (by the way, potential employers are lurking too). Even if you clearly divide your personal and professional interactions (which I strongly recommend) you may still have ‘lurkers’ you don’t even realize are popping by to have a look.

It pays to set your privacy settings to ‘friends only’ (and drill a little deeper down and sub-divide your 'friends' categorically) and check back frequently to make sure the settings haven’t changed. We’re in a world where if you don’t change you get left behind. People complain bitterly when their favorite social network introduces yet another update but it’s really only an attempt to stay ahead of the curve. So, you might as well embrace the changes but always watch your back because… you never know who’s watching you.

Expat Forever said…
Thank you for this reminder. That's funny because I updated my security settings on FB just yesterday ...
I try to check them regularly.
12 July 2012 at 06:49

Anonymous said…
Facebook can't invade your privacy if you don't put private stuff up there! My main principle is I never put anything on Facebook that I wouldn't want my mum to see. But FB keeps updating its settings and this new 'subscriber' option is a bit disturbing because it means people can lurk and comment but you never see them. I'm seriously thinking of banning subscribers but not sure what the implications are.
12 July 2012 at 18:57

linda@adventuresinexpatland.com said…
It can be a bit frustrating when it seems as though social media sites are 'changing the rules of the game', but as you note, it's often because the rules ARE changing. Younger people grew up with the internet and tend to blindly accept all iterations, not realizing the implications to privacy and security. Older generations may feel that it's all too intrusive and moving too quickly, to which I say 'yes, and it's not going away.' So as you note, for better or worse we need to educate ourselves and stay savvy. Thanks for the reminder Anne.
13 July 2012 at 08:25

Anne Louise O'Connell said…
Good point Susan! "Online privacy" is really an oxymoron, isn't it? Anyone who posts something on the internet with the expectation that it's 'private' is pretty naive. For people using Facebook for business purposes the 'subscriber' option is great. Most businesses who have scads of FB followers don't know them all personally so there's not much difference between a follower and a subscriber. It just reinforces my philosophy of keeping my profile for friends and family and my pages for business colleagues, clients, fellow communicators, etc.

Linda, it's kind of scary how open the younger generation is on social media. As the whole arena shakes out hopefully we'll all land on safe ground somewhere in the middle. In the meantime, let's continue 'socializing' and keeping each other up to date with the latest developments!
13 July 2012 at 21:10