Every year, during the ninth lunar month of the Chinese calendar, the streets of Phuket ring with the sound of loud drumming as mah song are possessed by Chinese Gods and Godesses. Rituals that cleanse and heal take place simultaneously.
As I watched one of the Chinese Goddesses, Ama Hua San Neo Neo, enter the body of Aea, a 14-year-old girl who is the daughter of my friend Thanya, she started writhing and shaking, her eyes rolling back into her head.  Aea is a Shaman or medium, chosen for her purity by the Goddess to be a vessel for messages and guidance, especially during the Phuket Vegetarian Festival. 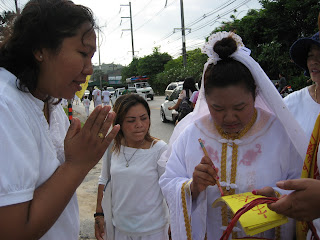 I joined the other devotees dressed in white from head to toe, and gave praise to each of the Chinese Gods and Goddesses, handing over my burning incense in homage.  Participating in the rituals brings good fortune, good health, brightness and inner peace.  During the celebrations we even burned gold leaf as an offering and in return will have ‘beng ang’ (good luck) and be rewarded with much gold.
The rituals were taking place in Chung Talay Chinese Temple in Bang Tao, Phuket as part of the annual Phuket Vegetarian Festival that runs from September 27th through October 5th. 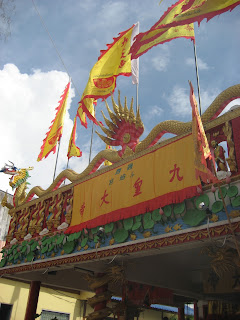 The festival started in 1825 after a group of opera singers fell ill while visiting Thailand from China to entertain the Chinese tin workers who had settled in Kathu District.  They believed that if they ate a vegetarian diet for three days (the original detox) to honour two of the emperor Gods, Kiew Ong Tai Teh and Yok Ong Sone Teh, they would be cured… and they were.
According to the Phuket Vegetarian Festival website: “It later happened that one familiar with the festival volunteered to return to Kansai, in China, where he invited the sacred Hiao Ho-le or Hiao lan (incense smoke) and Lian Tui (name plaques), which have the status of gods, to come stay in Kathu. He also brought holy writings used in the ceremonies, returning to Phuket on the seventh night of the ninth month. The people, upon hearing of his arrival, went in procession to Bang Niao Pier to bring him and his sacred cargo back. This was the origin of the processions that figure so greatly in the festival.”
Once the possession was complete Aea, the embodiment of her Goddess, joined her compatriots who had been simultaneously taken over by other deities.  They are the ‘mah song’ or ‘horses of the Gods’.  They would all carry their new hosts in a procession through town to the next Chinese temple to give praise to the all-mighty chairman, Kiew Ong Tai Tee. 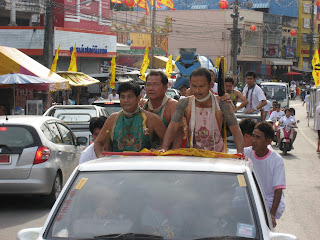 I joined the procession riding in a truck in the company of a group of children who had been given the very important role of percussionists.  They were responsible for keeping up the drumming and clanging of symbols throughout the two-hour long meandering through the streets of Phuket to ward off evil spirits.  It was an exuberant cacophony periodically amplified by others we passed on the roadside who also offered food and drink to the Gods. 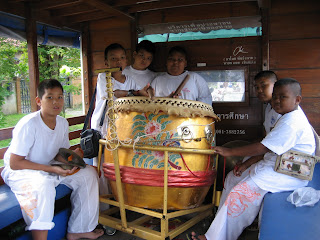 It was a joyful day punctuated by dramatic, even shocking demonstrations including self-cutting of the back and lips by some of the mah song with sharp axes (I saw the blood with my own eyes).  They claim that while they are possessed, they feel no pain.  It was so unbelievable as I watched one young man slice his bottom lip open that I couldn’t bring myself to pull my camera out.  But the image will remain in my mind’s eye for a very long time.  He didn’t even flinch.  Such is the strength and passion of his commitment and belief in his religion. 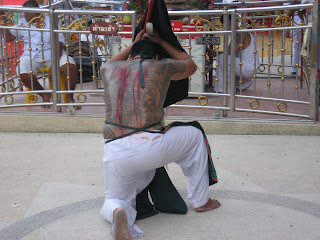 linda@adventuresinexpatland.com said…
Now THAT is something you don't see every day. Very, very unusual, yet opens the mind. You truly know you are in an entirely different culture, don't you?!
2 October 2011 at 14:28